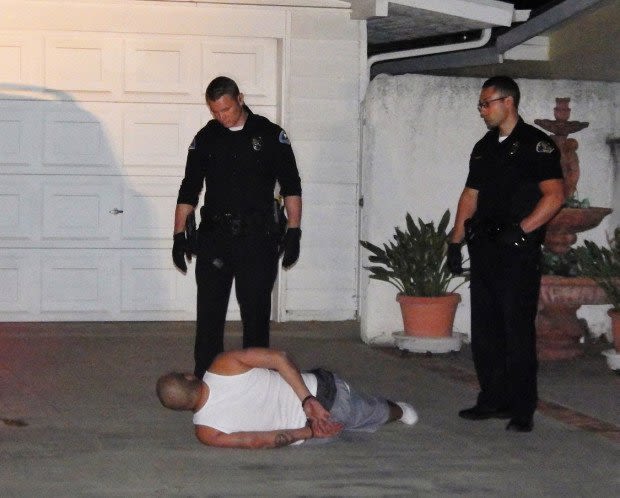 The driver of the overturned vehicle was a twenty-nine-year-old man. The car was traveling eastbound at a high rate of speed on West Coronet in Anaheim when it crashed into a parked car. The vehicle overturned and landed upside down. Inside, the driver’s ten-year-old stepson was trapped. However, authorities confirmed he was not injured. Bystanders comforted the boy until he was released to his mother, according to police sergeant Darren Wyatt.

The driver fled on foot, possibly intoxicated, and managed to cover two blocks before he was apprehended. Anaheim police caught up to him two blocks from the scene of the accident, and he was taken into custody. He was identified as Mark Costa, and was arrested on suspicion of driving under the influence. In addition, he will also be charged with a hit-and-run charge as well as child endangerment, according to Wyatt.

The accident occurred at about 12:35 AM on Sunday April 30. Luckily no one was injured.

If you or someone you love was involved in a car accident and were injured as a result, it is always best to protect your rights by talking to a personal injury lawyer. Most car accident attorneys will offer free consultations to give you a better understanding of your case. After your accident, you may be facing severe repercussions and dealing with legal factors that are more complicated than you expected. Trying to recover from your injuries while handling legal issues is less than ideal.

However, a personal injury lawyer will be able to handle all the legalities of your case while getting you the medical attention you need. Depending on your case, you may receive benefits from your accident. You may be eligible for benefits that would pay for medical bills, funeral costs, and other expenses that you might have obtained as a result of your pain and suffering. Talk to a personal injury lawyer today to learn more about your rights and how you can get compensation for your injuries.